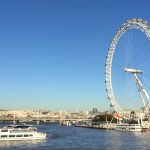 Nancy was greeted off the plane by myself and Louise Robertson, formerly of 28 Too Many, carrying a warm coat, scarf and gloves. It was late November and she had just flown from Kenya, a country which straddles the equator!  The Commonwealth Secretariat’s event was the next day and we raced to the wonderfully glamorous Malborough House, a former palace,  for a rehearsal of Nancy’s speech, arriving just in time. 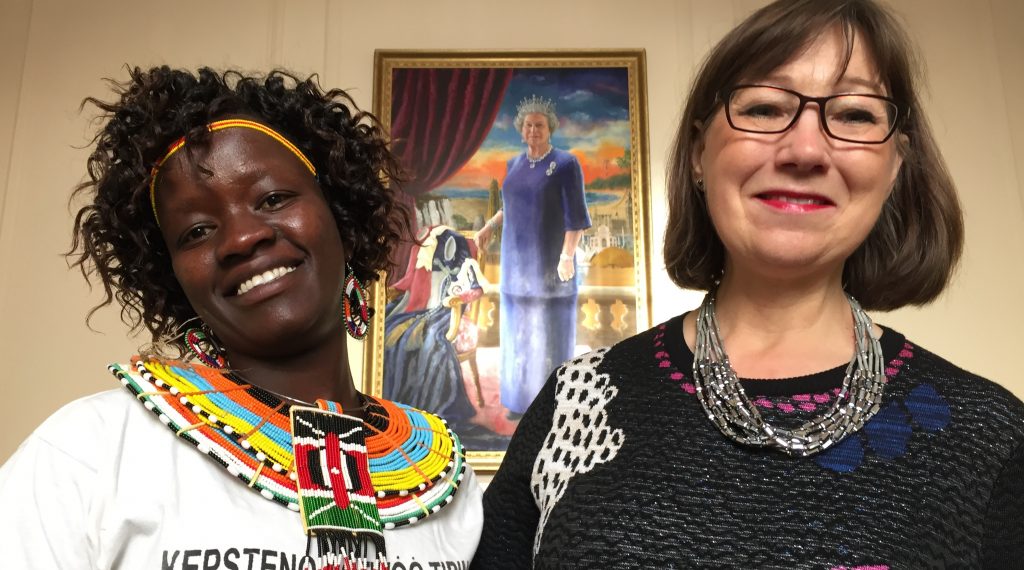 The event was co-hosted by the Commonwealth Girls Education Fund, (who funded most of Nancy’s secondary education) and the Commonwealth Secretariat. Nancy loved meeting Judith Fisher the chairman of CGEF and they bonded immediately.

Nancy was both a panelist and guest speaker and she gave an excellent off the cuff speech. It demonstrated her continued passion for change as well as her lion hearted courage. A clip of her speech is in the movie shown on our home page. 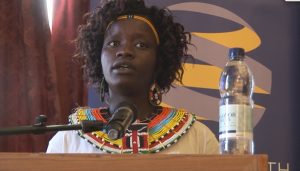 Next Nancy was shuttled to the BBC world Service immediately after the eventwhere a comic moment occurred when Nancy got a coughing fit from the air conditioning whilst live on air – and the presenter had to cut away from her story for a short time. She was brilliant nevertheless. 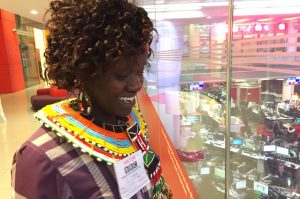 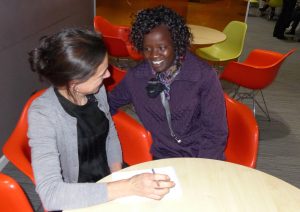 She also met a Reuters Thomson journalist at Canary Wharf and a Labour MP, Sarah Champion to discuss the issues of getting support for the campaign. 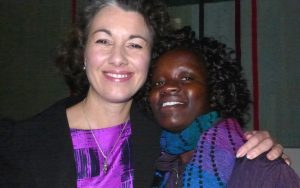 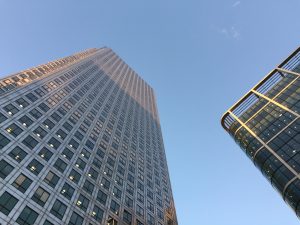 Nancy loved being in London and would occasionally break into laughter exclaiming ‘wow, it is so unique!‘

The Commonwealth very kindly put her up in the Strand Palace hotel where Nancy had tea with her  Madrinha Trust sponsors. She really bonded with her mentor Ronke, which was truly wonderful to see. 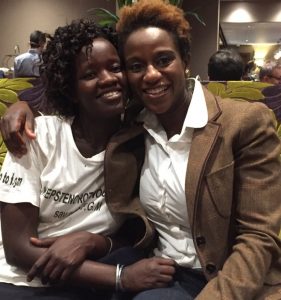 …….from there we did whirlwind tours in between revising for her exams – which we discovered only when she arrived, were immediately on her return. Yikes….. 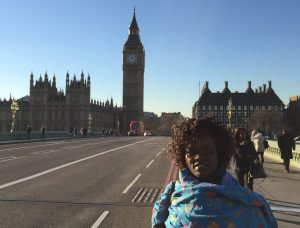 We could not miss seeing Big Ben or The millenium wheel, and Nelson Mandela’s statue, Parliament and as a special treat I took Nancy to the theatre to see Lion King. She loved the Lion King boy, and was awed by the creativity of the show, she was absorbing it as if hungry for it. Laughing in amazement. We came out singing Hakuna Mutata together…One of the highlights apart from the event itself, was attending the Advent Procession at St Paul’s Cathedral by kind invitation of Judith Fisher who runs the CGEF. Again Judith and Nancy bonded naturally. Nancy sings well, but even she would admit she couldn’t match the sublimely angelic sounds of the choir. 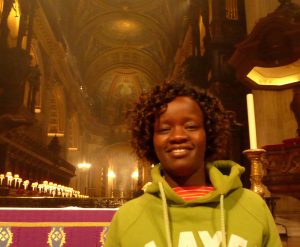 Nancy consumed more McDonalds fried chicken nuggets with chilli sauce than I could count – and it became a challenge finding something else she would eat with such relish. Chicken and eggs were safe. Not much else! We rushed around London packing in the tourist sites…

Being together gave us a chance to look back and celebrate how far things had come since we met in 2010, and all that we’d achieved together since, as well as plan a strategy for the future, and the creation of her group which is written about in another blog.

However it was also a chance to talk heart-to-heart for whilst there was much to celebrate there is always a darker side to being a cultural pioneer.

A heart-to-heart and home challenges

Sadly Nancy reported a few members of her extended family had ganged up against her. They had become impatient and disappointed because she’d chosen her childhood sweetheart for a husband. This was a love match and the reason for the tension was he was too poor to pay a bride price.  He could not offer the number of cows which it is the tradition to supply when a man ‘buys’ a wife.  Usually of course the women are cut and sold to the man who can offer the most cows.

Nancy had resisted so a few of her family who wanted this bride price had thrown stones at her and her son Kevin which for her was terrifying of course. I felt helpless for I had no fairy Godmothers magic wand. We talked solutions for perhaps the key was to empower her husband more so that perhaps he could pay enough of a dowry to ease tensions as well as build his own esteem too.

She returned with more hope but also confessed that even when her school fee’s were paid there had been much struggle in the past, and now she was struggling to find fees to pay for her sisters school.

She knew how hard this was, even when she had fees paid she’d had to work hard to collect wood to earn enough to cover her extra needs as well as help her family.

It is not easy being a pioneer. Nancy is strong, but for her to succeed she does need real support both financial and psychological. I cannot supply all of this myself.

However to help boost her,  after the Commonwealth event, she met up again with the granddaughter of one of the well known Suffragettes who had been involved in the start of this fund. It was clear that Nancy has challenges to face just as the Suffragettes did when they too were breaking the taboos of our culture too.

With the level of poverty and ingrained thinking and expectation that women are property Nancy’s heartbreaking experience of being stoned flagged up one of the core issues.  Like the Suffragettes who went to prison and suffered great hardships, Nancy and others too have to suffer the consequences of being a pioneer when her culture is in transition. A solution needs to be found to the issue of when girls choose to resist and do not get cut and married for cows,  how to ease the situation when their families experience this as a great economic loss. The challenge is how to replace this economic dependence on bride price ?

An idea which I will expand on another time is expanding girls economic power and ownership of their own earnings. Growing Moringa trees and selling the leaf power which is sought after for its rich nutrient properties in the west could provide a solution, but step by step.

Nancy, has first to finish college and end FGM, and help her brothers and sisters attend school. She is also accused by some of being rich and not helping others! What an irony!  Even though she has nothing and has given so much!

It is clear from Nancy’s story that empowering women is key and needs to be matched by ensuring the whole community of women are economically empowered and can own their own earnings, which are currently considered their husbands property as they are too. This empowerment would help them share the responsibility to provide for the family and help the whole. Equality and gender balance is a work in progress but a cause that will help deliver the whole community from its impoverishment!