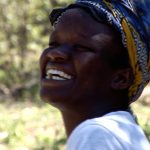 Next year it will be the centenary celebration of when the British Suffragette’s won the right for women to vote. One hundred years on, the new frontline is in Africa and the Middle East where women may have the right to vote, but not always ownership of their bodies, or even their lives. Yet there are remarkably few films about African feminist heroines, least of all from remote African villages, especially patriarchal tribes like Nancy’s.  This gives Nancy and her tribes journey, observed over many years on film, particular global relevance as a unique record of change. Like the girls Nancy has helped to save whose stories are told in the film, my life (the director) has also been irrevocably changed by meeting her.

For a storyteller it is a rare gift to film a life changing moment and share it with an audience.  Particularly when it is as inspiring as the moment I was privileged to witness in 2010, when I first filmed Nancy pledge publicly that she would be an ‘example for others to follow’.  In this moment she emerged as a young leader and activist determined to end FGM.  Her speech had a profound impact on everyone present. I did not speak Pokot, but the excitement that rippled through the audience was palpable, and when I finally read the translations, I understood what an extraordinary moment it was.

Nancy’s tribe, the Pokot, still practice FGM, child marriage and bride price in the more rural parts, and it is one of the remotest and most patriarchal tribes in Kenya. Nancy had shown enormous courage resisting centuries of tradition, and by the time I met her she had been defending her wholeness for many years.

The moment is recorded in the first short film I, (Sara the director) made about Nancy and other resistors which was broadcast on Al Jazeera and The Guardian. Due to the impact it had on audiences it won two Webby Awards for Best Single Documentary (Judges and People’s Choice) and was a runner up for the Rory Peck Sony Impact Prize.

During my TV career I had experienced gender discrimination and it had left me feeling disempowered and voiceless, but here was an uneducated girl from the remote African hills standing up despite the very real threats. I was in awe of her courage. What struck me then and now, is that her story has an archetypal, universal quality, for in many ways it is every womans story; it is for all those women who have the courage to say no to abuse and aspire to live more fully. Nancy leads the way simply because she follows her own inner wisdom even when it is at odds with the approval of those around her.

Nancy’s speech planted the seed which finally led to me giving up paid work in broadcast TV and inspired me to focus on hopeful stories about big hearted characters who leave the world a better place.  Nancy’s story on film will help her magnify change in her community manyfold and attract support for her movement for change.  This decision has altered the direction of my life as much as it has Nancy’s. Filming over long durations of time has often been achieved on a wing and a prayer. Yet what has inspired me to keep going is to see Nancy’s desire for change bubble up from within her –  as if she is guided by a deeper inner inspiration and conviction. Whilst the subject is gruesome, the film has charm and exuberance thanks to Nancy’s charismatic personality. See for yourself in the clip below where Nancy shares her feelings herself.

Africa is desperately in need of women leaders, as well as stories about empowered women. Nancy is the granddaughter of a storyteller and a natural leader and with so much at stake for women in her tribe, it is women like her who give hope for the future.   As Mandela said ‘Freedom cannot be achieved unless the women have been emancipated from all forms of oppression’.

Without support for women like Nancy working to develop her community and save other girls who can become ambassadors for change, can the future of Africa be secure?

I will be serialising short clips posted on Facebook from the edit as I progress through the story – clips such as a statement from a one-eyed circumcizor about what motivated her to cut a girl whilst she gave birth, which tragically killed her. On a different note, the hilarious descriptions of New York as seen through Nancy’s eyes as she tells bedtime stories to her younger siblings on return from the UN!

So tune in on FACEBOOK by LIKE-ing the page.