If a Kenyan Pokot girl say’s No to FGM, she will equally be saying no to marriage and no to providing cows for her family. In the countries which practice FGM, the wealth a girl traditionally brings to a family through the marriage ‘sale’ is a core motivation for parents to cut their girls and marry them off, often to an older man.  Within such cultures women are traditionally seen as property owned by men to be sold for a bride price.

Whilst the girls themselves may increasingly choose education over being cut and early marriage, few families can afford secondary education and it certainly does not produce the instant economic benefits that the payment of a bride price does.

Unless more men declare they prefer to pay a bride price to marry an uncut woman or the parents can afford for her to attend school then the economic pressures will be on the girl to follow the tradition of cutting to continue. Replacing this is a major challenge. Education for a girl can be a slow way to provide economic returns but gender inequality has profound, if less obvious, economic costs too which are explored through the characters in the film. 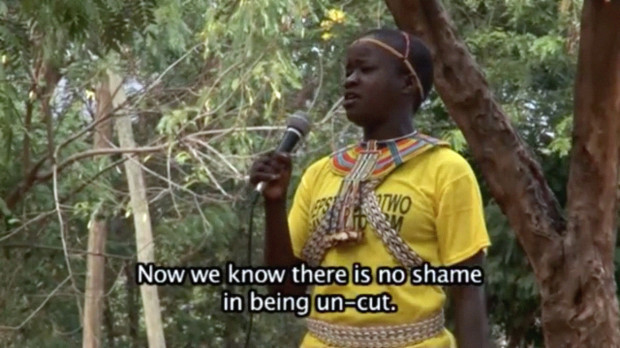 Where does love come into this? That is hard to answer for each family is different, it is a complex and individual issue but very often girls are seen more as property rather than as individuals with a right to self actualise or fulfil themselves. Whilst love may not be absent the tradition of bride price often overrides a parents concern for her child to marry a man she might choose.

A multi-pronged approach is the solution by which parents are educated about; the health risks of cutting for their daughters during the circumcision ceremony, the sexual and psychological damage FGM causes to the relations between man and wife, and the increased health risks during childbirth. In addition, it is important to highlight the many advantages of education compared to the multiple negative impacts that FGM and child marriage have on the well-being and economic development of the WHOLE community.

As Kofi Annan said “There is no tool for development more effective than the empowerment of women”,  highlighting the direct correlation between gender equality, and cultural and economic development.

Many women are forced to cut trees for firewood to sell for charcoal, adding to environmental degradation and climate change. The expansion of populations and resulting competition for scarce resources, as a result of the practice of polygamy also has a major impact. The empowerment of women and greater gender equality is a way to reduce these impacts, as well as improve gender relations!

The impacts and the solutions are all outlined in the story of Nancy A One Girl Revolution, told in a narrative form which has a universal appeal given it is based around the archetype of a girl who transcends the social challenges she faces. It has a fairy tale quality, whilst being a story everyone can relate to, after Nancy proves that we all have the power to change things.

Storytelling and drama is a powerful tool which can ensure that parents are open to listen to the difficult issues that they may wish to avoid. Stories and songs have long been used to foster change and integrate new ideas within traditional cultures and underpin all cultural change.

Nancy A One Girl Revolution is the story of a young African Suffragette leading a movement to end FGM and child marriage. The film maker Sara Nason intends to use the film to bring awareness and change the lives of other young women through supporting Nancy to go forward with her Girl Revolution to empower women to remain whole and end the practice of FGM and child marriage.

Click to watch the introduction to  Nancy A One Girl Revolution

Donate to the Nancy’s Girl Revolution